100+ Reasons To Invite Darren Sardelli To Your School!!!

Now Booking Schools For The 2015-16 School Year
Posted by Darren Sardelli - Author, Poet, Motivational Speaker at 12:25 AM No comments:

A Day with Darren Sardelli 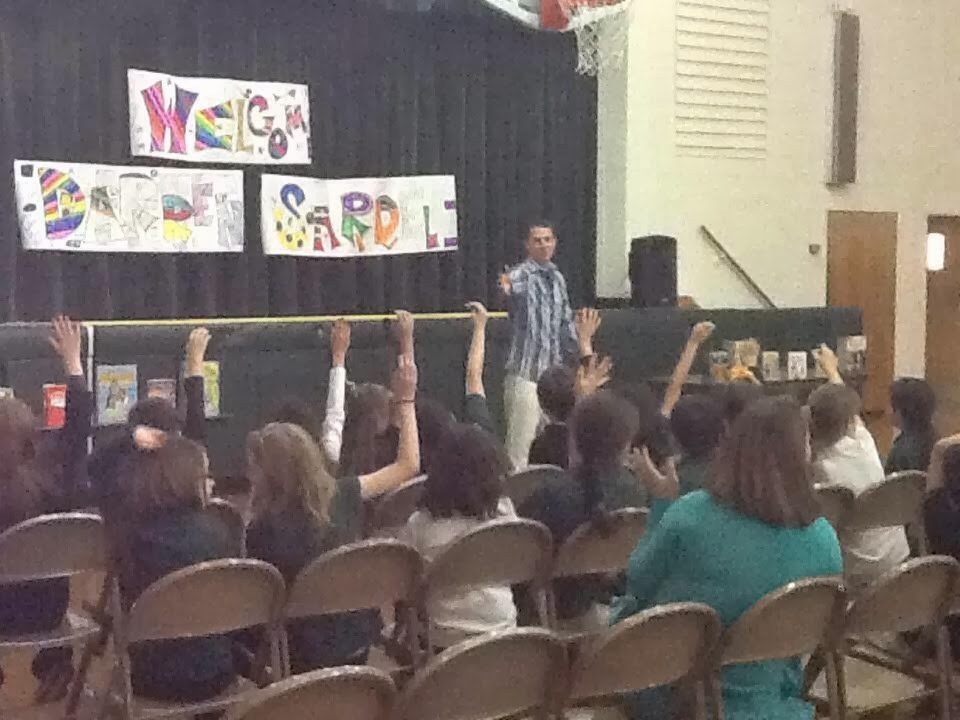 Back in the fall my wife worked to get a children's author who wrote funny poetry to visit her school. We'd seen an article about the author, Darren Sardelli, in a local mailing from the school district we live in. The article praised Sardelli and his workshops with the kids so we looked him up. In doing so I remembered (and that's key for me) that I had seen him before - I had caught the tail-end of one of his assemblies at the school where I work after-school care. I didn't remember much about his assembly because it was just wrapping up when I arrived. I did, however, remember the applause from the kids at the close of the assembly and hearing that the teachers were very pleased.

My wife sought out reviews by contacting schools around our area that he previously visited. All had glowing reviews. So, the rest as they say is history and she got Darren to come for a visit.

Knowing this was a great opportunity - one not to be missed - to watch an author at work - an author whose work is targeted toward children (as my own upcoming novel is geared in the direction of YA) - I had to take the day off from my day jobs and observe. I'm so glad I did.

From 8am Wednesday morning until 8pm that night, Darren worked with high energy. He performed three assemblies from 8:40am to 11 - three assemblies with three different age groups. In each assembly the crowds of children were absolutely captivated, entertained, and ever so willing to partake in moments when he looked for participation (and were quite willing to participate even when he wasn't looking for it). Obviously being the professional he was, Darren made each assembly flow, riding the crests of the children's enthusiasm. And while children's interests are very hard, if not impossible to predict, one might think that a man trying to get kids on board with writing poetry would be facing a tough task, one in line with that of pushing a double-decker bus up a muddy hill.

Darren's poetry is funny and the subject matter very relatable to kids (and adults who can appreciate the silliness of childhood and the innocence of their creativity). His imagination begs for participation, and the kids, as I mentioned earlier, were all too willing to raise their hands and provide input, even at times when they weren't being asked. I've seen many speakers of different subjects bore an audience of children to tears. Not one kid wanted their assembly to end.

They were totally on board with poetry. It was made cool to them.

Probably the best part of my day was actually getting to speak to Darren one-on-one. I hadn't gone with the intention of picking his brain (God knows I never intend on bothering anyone, especially someone who probably gets approached all the time by those wanting to know every nook and cranny of his career), but he actually approached me, asked about me. When I told him I was being published in the spring he offered a genuine congrats and gave me his business card with an offer to help out with anything I might need. How cool is that?! (I, of course, handed him one of my cards in return.)

During some down time in his busy day, Darren asked about my book, and I asked him questions about his school tours. He gave me priceless advice on doing talks at schools and the importance of getting into libraries. We also talked about performing live comedy. I mentioned I did improv comedy and he told me about wanting to try stand-up some day.

Overall, the experience of meeting Darren Sardelli and seeing his morning assemblies and afternoon poetry writing workshops and evening parent assembly with a follow-up book signing was simply inspiring. To know someone living that lifestyle that all writers/authors wish for (to know how hard he works to earn that lifestyle) - to see him work for twelve hours straight (and not show one sign of being worn out in front of the kids or their parents) is a type of inspiration beyond simple words.

I highly recommend Darren to any school or function.

And his visit is one that I - and I am sure every child and adult who saw him on Wednesday, or any other place he's been - will always remember.